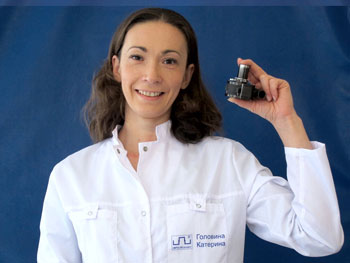 Nowadays, the main technologies for the treatment of severe heart failure are based on:

The use of MCSS pumps as a “bridge to transplantation” is an effective solution to the existing problem. The topical issue in the field of application of circulatory assist systems is still the issue of safety of such systems for blood corpuscles. The main disadvantage of the existing LVAD pumps is the traumatic effect on the blood cells, in particular as a result of the high rotor speed. In addition, the formation of blood clots can be a consequence of turbulent flow of blood in such devices. That said, the cost of MCSS pumps should be comparable to the cost of the operation performed. 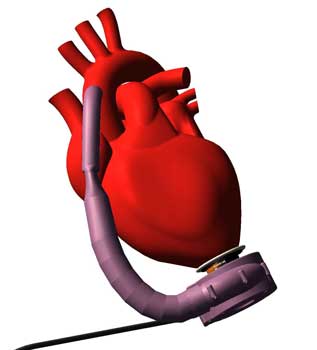 Since 2016, the research team of AO NPK “IMPULSE-PROJECT”, together with the FSBI “Meshalkin National Medical Research Center” of the Ministry of Health of the Russian Federation, undertakes research work to create a new MCS disc-type pump. At the stage of developing the new MCS, one of the main tasks was to create a safe device with a low cost, in order to ensure the availability of surgeries and, as a consequence, increase the number of patient care cases.

For the first time, the assumption that the disc pump can find application in medicine was formed in the studies conducted by the FSBI “Meshalkin National Medical Research Center” of the Ministry of Health of Russia n Federation together with the ITAM named after S.A. Khristianovich SB RAS.

In order to establish the biological compatibility of the disc pump, experimental studies were performed. The research of the experimental model carried out at the FSBI “Meshalkin National Medical Research Center” of the Ministry of Health of the Russian Federation showed a low level of free hemoglobin in the blood and confirmed the prospects for further scientific research. During the tests, a mockup of a disc pump for artificial circulatory support was used. As a result of the studies, the research team of AO NPK “IMPULSE-PROJECT” proposed the development of a disc pump in the form of an original disc pump LVAD magnetic levitation design for mechanical and extracorporeal assistance of the human heart (DP LVAD ML).

The first commercial version of the pump is named DP LVAD ML "CardioImpulse". 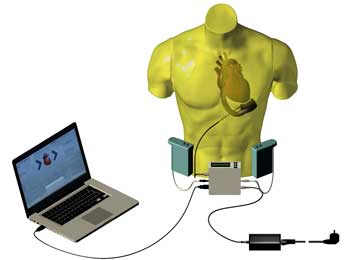 The work carried out, as part of a grant from the Innovation Promotion Fund, made it possible to develop and implement the DP LVAD ML "CardioImpulse" design. The device developed by our research team is a new circulatory support apparatus. One of the distinctive properties of the developed pump is the nominal rotation speed of its rotor, which is only 2700 rpm; it is actually the lowest indicator among the known MCS pumps. The rotor speed is directly related to the destruction of blood corpuscles. In a series of biomedical studies, the average level of free hemoglobin was 2.2 mg% with an acceptable level of up to 10 mg%.

Additional factors that ensure careful blood circulation in the device are magnetic levitation, elimination of stagnant zones, and biocompatible coating.

The main purpose of the rotor magnetic levitation is to exclude trauma to blood cells and formation of blood clots. The absence of a mechanical bearing to the design of the device made it possible to avoid friction between the pump design elements. In the place of contact of blood with the bearing, destruction of blood corpuscles occurs, and friction is also the reason for a decrease in the efficiency and service life.

The implemented pump uses magnetic levitation, in which the rotor is in a contactless suspension.

The pump rotor does not have an axis, and an additional element, a flow divider, was created in the emerged free area in the lower part of the housing of the development prototype. Use of a divider element in the design and elimination of the rotation axis, as well as mechanical bearings, made it possible to avoid the formation of stagnant zones. When creating the device, the research team of the project carried out comprehensive step-by-step research, consisting of methods of computational fluid dynamics, bench-test research and a complex of biomedical tests. The levels of shear stresses and turbulent flows in the design of the prototype were investigated. The design of the development prototype was adjusted according to the results of each stage, in order to exclude the formation of stagnant zones, vortex-type flows.

In the DP LVAD ML disk pump, a silicon-carbon (a-C:H:SiOx) film was used to improve the mechanical and tribological properties, as well as to add atrombogenic properties to the surface. The a-C:H:SiOx film is applied based on the equipment of the Institute of High Current Electronics SB RAS (IHCE SB RAS). The use of electron beam grinding made it possible to significantly reduce the roughness of the surface relief by smoothing the surface without introducing additional chemical elements into the device, and to overcome the existing technological barriers associated with grinding and polishing of the surfaces of devices contacting with blood.

External view of the implanted part of the device 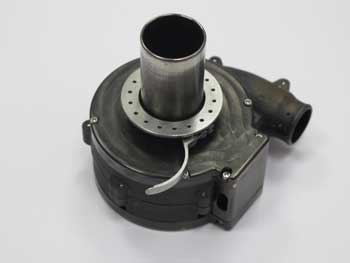 A disc-type blood pump designed to connect to the left ventricle and the ascending aorta of the heart, while providing the required minute volume of blood circulation. .

External view of extracorporeal components of the "CardioImpulse" apparatus 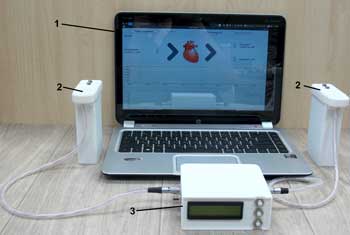 In the given figure, the following extracorporeal components of the device are numbered:

1 – monitor is connected when the device is started up, 2 – storage batteries, 3 – control system.

Set of implantable components of the device 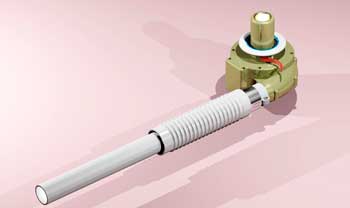 The set of implantable components is designed to connect the implantable pump to the human cardiovascular system. The set consists of one inlet and two outlet cannulas, felt sheets to make cuffs, and a blood vessel prosthesis.

In practical application when treating patients, the device can be used both in the implantable and extracorporeal versions.

In the implantable version, the device is used for surgeries on a two-stage model of heart replacement, in which a disk pump is implanted into the human body, and external units (control unit and power supply unit) are placed on the patient's body.

In the extracorporeal version, the device is used: for temporary connection to the human body in acute cardiac insufficiency that occurs during cardiac surgeries with artificial circulation; for the purposes of extracorporeal blood circulation during isolated chemoperfusion and oncological practice.

The device can be used in medical centers, departments of clinics and hospitals specializing in cardiovascular surgery, transplantology, cardiac intensive care and oncology.

The entire design of the pump is made in such a way that when pumping, the most careful handling of blood is ensured due to the following factors: low rotor speed, unobstructed flow of blood through the pump without interaction with structural elements, such as bearing units.

The moving flow of blood does not come into contact with the internal elements of the structure, except for the walls of the housing, while a boundary layer is formed along the surfaces of the elements of the rotor, which reduces the mechanical effect on the blood corpuscles. A new element “flow divider” was created in the design of the product, which is located in the lower part of the disc pump housing. The use of a “flow divider” in the design eliminates the formation of stagnant zones.

Serial production of the developed device is scheduled for 2021. The successful implementation of the project will require the involvement of various investment instruments.

The scientific team of AO NPK “IMPULSE-PROJECT” expresses its gratitude to the Innovation Promotion Fund for the financial support provided in the creation of an innovative implantable pump for mechanical and extracorporeal heart assistance (LVAD) based on the effect of viscous friction magnetic levitation of the rotor.

The scientific team of    AO NPK “IMPULSE-PROJECT” expresses gratitude to the co-executors of the project:

FSBI “Meshalkin National Medical Research Center” of the Ministry of Health of the Russian Federation;;